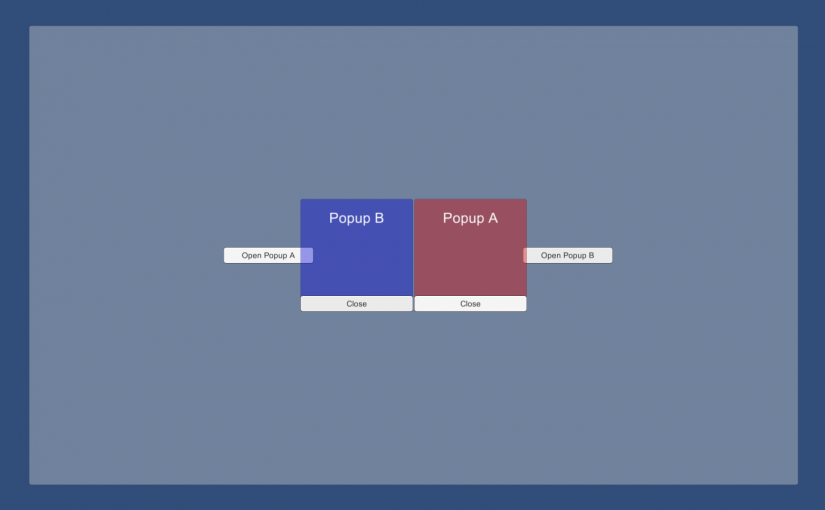 If your game contains at least some user interfaces, you will quickly run into the need of manage them in a central place. In our past games we developed a generic window manager that can be used in any project. It takes over the all the loading/unloading of windows and makes sure windows are not opened multiple times.

The window manager can be used out of the box, but it makes some demands on how you setup your UIs.

One window, one scene

First of all the manager expects that each window is stored in a separate scene. This shouldn’t be a problematic demand as separating the windows in some way is a good idea anyway. The name of the scene is used as the window id by which you open/close a window.

Other than that you are free to setup your window scenes the way you like. Most often you will have a single canvas in it, so there is one root game object. Underneath you design the UI of your window with Unity UI or any other UI system as you are used to.

You can easily access the WindowManager  by using its static property WindowManager.Instance . In general I don’t like singletons that much and in fact it doesn’t create a window manager itself. Instead it just stores the first initialized window manager via its Awake()  method.

Now let’s dive right into the implementation. You might want to check out the Bitbucket repository and pull the sample project to follow my descriptions easier.

As you might have guessed most of the work is done by the WindowManager  class. It has a slim interface to open and close windows:

Internally it contains a list of Window  objects, each storing information about an open window:

The Window class holds information about an open window.
C#

Let’s have a look now what happens when a new window is opened. The method gets up to 4 parameters, but only the first is mandatory:

The window id has to be unique and has two functions: First of all it acts as an identifier to close the window via its id later on and to avoid opening the same window twice. It is also used to load the window as the window id and the name of the scene the window is saved in have to be the same.

What the OpenWindow  method does is:

You can check out the steps one by one in the WindowManager.DoOpenWindow  method.

The usage is a very simple one-liner (see the OpenWindow script in the sample project):

Opening a window before Unity 5.3

Before Unity 5.3 the logic and creation of a window was a bit more difficult as there was no chance to get the Transform s that belong to a specific scene. Version 5.3 introduced a new SceneManager  though which makes multiscene editing possible and additive scene loading. Plus each game object has a property to indicate which scene it belongs to ( GameObject.Scene ). Check out the details at http://docs.unity3d.com/Manual/UpgradeGuide53.html.

In Unity 5.2 and lower it was necessary to put a WindowRoot  script on the root game object of your window scenes. This had an identifier which had to be the same as the window id, so the window manager could find the root Transforms of a loaded window/scene.

To close a window, just call the CloseWindow  method and pass the window id or the window object you got by the OpenWindow  method. Additionally a return value could be passed which might be interesting for the listeners of the WindowClosed  event.

After checking if the window is open, the method performs the following steps:

As you can see the steps to close just invert the ones to open the window. Thanks to the SceneManager  of Unity 5.3 it’s only some lines of code.

As opening a window, closing it is simple as well (see the CloseWindow script in the sample project):

After you opened a window you can use it as you want. A common use case is to hide/show it. This just deactivates/activates the root game objects of a window and can be performed via the Hide() / Show()  methods of the Window class.

The current version contains just the basic functionality to manage UI windows in a project. With it you can easily and cleanly open and close windows and manage them in separate scenes.

In a real project though there are a lot more features that have to be added:

Those are just a few requirements for a window manager used in practice. I will cover some of them in future posts, so check back soon. If you have any questions, don’t hesitate to ask! And if you want to have a specific thing about window management covered in the next post about it, let me know 🙂