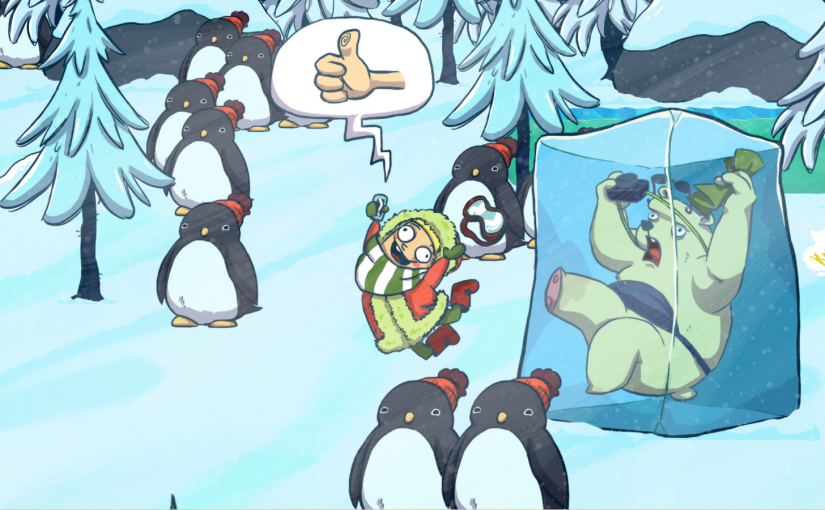 Many of you will have heard about it or even participated in it. I’m talking about the Global Game Jam 2016 last weekend! Like in the past few years I took part as well, this time at InnoGames, host of regular game jams.

We expected a bit more to brainstorm about, but it was okay as my team this time was a bit different than last time. Kerstin Buzelan aka Noody was on board again and Henning Behrend aka Orbinaut took care of the sounds again. But this time we had some reinforcements from the Threaks, a friendly Indie studio from Hamburg:

After deciding to work together we started to brainstorm for some time to come up with new ideas for the old theme. We decided to think more towards nowadays rituals instead of ancient ones.

In the end our choice was to create a game out of the everyday ritual that comes up whenever you try to do a video call or conference: Searching a spot where you have good reception so your colleague  at the other end of the wire can hear and see you. It should sound familiar 😉

To do something new we wanted to create a multiplayer game which is played on two different devices:

Player B is the one who calls but as he soon realizes the reception of player A is pretty bad. So he has to lead him to a better spot. The closer player A is to the good spot the clearer the transmission becomes.

Player A should check back with Player B to move to the right spot. But apart from that he struggles with slippery movement, strong squalls…and penguins 😉 It shouldn’t get too easy!

Can you hear me now?

Start the game by installing it on your Android phone or tablet. As soon as you start up the other part on a PC in the same network, you should be able to call the PC player.

With WASD the PC player can move around. He should carefully listen to the Mobile player as he doesn’t have any indicator where to go. And the area is quite puzzling, so don’t get lost! Even worse: The battery of the mobile player runs out quite quickly, so hurry up and find the transmission spot!

Together you can make it and hopefully find the right spot. There are 3 spots which are randomly selected, can you find them all? 🙂

If you are interested, check out the not so clean but not that messy (for a game jam) source code at bitbucket.

Thanks to the whole team for the weekend:

It was a fun weekend again with a great team! If you haven’t joined a game jam yet, I can highly recommend trying it. My general notes about game jamming are still valid 🙂