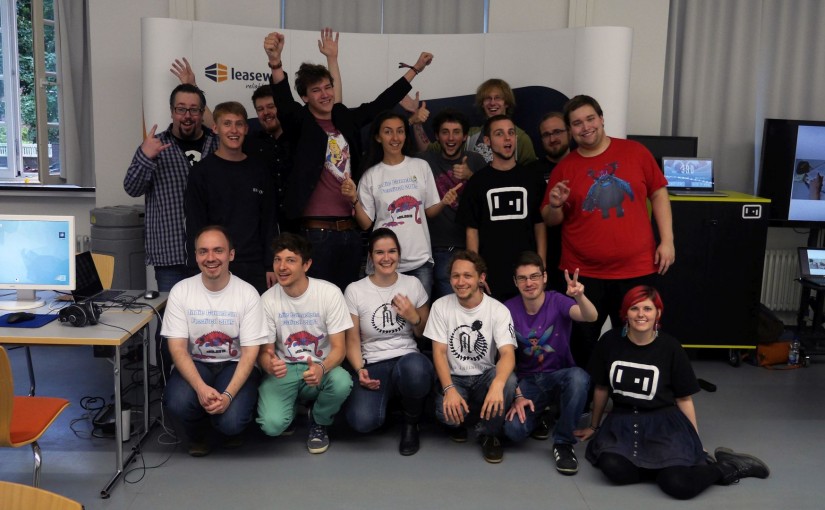 It’s over! The first edition of Indie Gameleon took place from Friday, 11th September till Tuesday, 15th September. And it was just super! Super laborious to organize, but also super interesting and exciting for everyone who attended the event.

The first part of the festival was an (almost) 48 hours game jam, the type of event that best summarizes the spirit of indie game development. 25 participants met on Friday evening, were given a nice meal and free drinks. Afterwards the theme was revealed:

“Making a positive impact on the real world”

As with all topics for game jams this one was open for interpretation as well and we were very eager to see what the 6 teams with 3 to 6 people would make out of it.

Here are some impressions of the jam:

The teams were hard working for about 43 hours. Everybody got a little sleep, it doesn’t make sense to try to stay awake all the time. There were teams that didn’t work together before but really became a well-oiled dev team within a short time.

On Saturday we forced the teams to do a quick status update for us and the other teams to make sure everybody is on track and got something working already. At a game jam it’s important to get to a feature-complete version at least about half a day before the deadline to have time for thorough polishing.

Every team got a working game on Sunday and our small jury had to decide which team gets which awards in the about 23 (!) different categories. There were awards for Best Graphics, Story, Sound and so on, but also the Kafka and Monty Python, the KISS, the Group Hug Award,… So we had a lot of fun and every team got at least a few awards.

Best of Show became the adventure Nobody is attending by the Adventure Tiem. They managed to create a working, funny and complete adventure within the short time.

The second part of the festival started immediately the day after the game jam. We had a conference with 21 great talks and a showcase with about 10 teams. So there was a lot to see and listen to on those days.

Unfortunately we couldn’t manage to spread the word enough, so there were only about 100 visitors. Because of the two parallel tracks, the audiences at the stages weren’t as big as the speakers would have deserved it. Which made me a bit sad. But I guess such an event has to be established first and the number of visitors will increase if the quality is good. And as I could hear from many of the attendees they were very happy with the talks and the organization. This gives me new motivation to repeat it next year, at least the conference.

We even managed to record the talks on one of the tracks, so you can get a picture of the quality soon. Best would be to follow the Facebook or the Twitter page, we’ll announce it when the videos are online.

Till then have a look at some pictures which should give you a nice impression of the conference and the showcases:

Each time I help to organize an event I think it shouldn’t be too hard and time-consuming to do as it is pretty clear what to do. But all the little things add up quite quickly and especially the last weeks there isn’t much time beside your normal work and the organization of the event. I even had to cut some hours from my project work.

So now some points come to my mind that could help making it easier:

This is a very obvious point. Although you like to keep the organization team as small as possible to make quick decisions, the more people that do work, the lesser it’s for each one. Maybe a good idea would be to have a small core team and a bigger worker team around it.

Not only the number of organizers is important, but especially the quality of the organizers. The most important characteristic is reliability. It doesn’t matter what one says he will do but what of it he actually gets done. Nothing is worse than tasks which are assigned but are not done and have to be reassigned. Sometimes there are just more important things to do (e.g. in your work or personal life) than the voluntary tasks for the event. But make sure that you only take that many tasks as you can manage and better tell your team mates immediately if something is too time consuming for you.

I’d like to make a list of all the areas that have to be organized for the event and assign an estimated workload for each. The interfaces between the areas should be as small as possible. Some could be:

Each person shouldn’t have more than 2-3 areas assigned to him, so nobody looses the overview over his tasks. It may be necessary to split up an area even more. The goal should be that everyone can act as independent from the rest of the team as possible. There will be weekly meetings probably, the overhead for inter-team communication should be kept as small as possible.

There are several things you might miss to organize for an event of some size. Or you think of them too late to organize them (e.g. shirts and schedules have to be printed on time).

An easy way would be some checklists for the different work areas to make sure nothing slips through the cracks. Best is to create them at the start of organizing the event and keep them updated throughout. If you do the same kind of event again you’ll have a quite good starting point.

There are several tools which make working in an organizing team easier:

Despite my little disappointment about the number of visitors, I’m also proud about what we accomplished with a great team of voluntary people for the Indie game development scene. I’m still sure that there is demand for this kind of events, so Indie developers can meet each other to exchange knowledge and experience and have a nice time away from their daily work to gather new/more motivation for their projects.

So next year there will probably be another Indie game dev event in Hamburg, beside our regular meetup, the Hamburger Indie Treff. And I’d love to help organize it 🙂