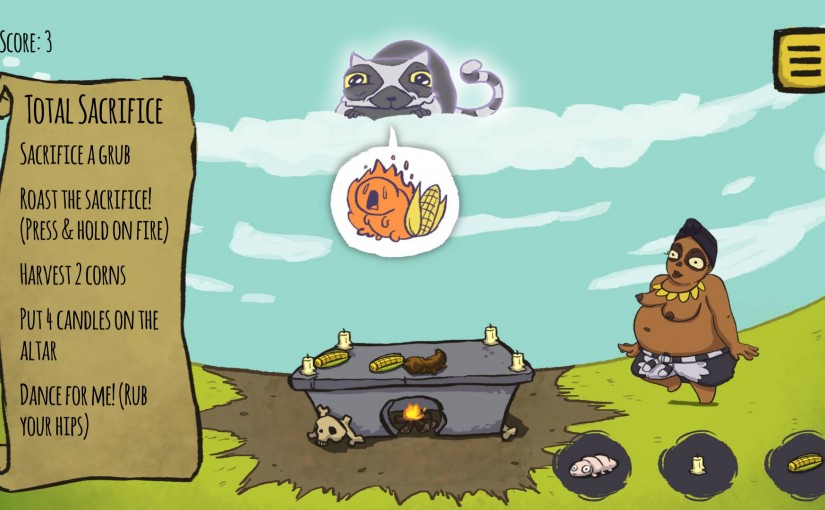 From time to time working on your main project might feel a bit too much like work instead of fun. This might be the moment to participate in a game jam to get your head free from your daily stuff and blow the cobwebs away. Chances are pretty big that there is one near you soon, if you don’t find one check out http://www.indiegamejams.com/.

I guess most game developers have already participated in a game jam, so I will just give a very short explanation. A game jam is a game development event which spans about 48 hours most of the time. Game developers of all kinds (coders, artists, designers,…) come together, form teams and try to develop a small game from scratch within the time frame. There’s often a theme for the jam to help pushing the game ideas in a specific direction. Other than that the teams are free to work however they like. Check out Wikipedia for some more information.

Last weekend I participated in my 9th game jam. Most of them were pretty successful, some were less and some gave me the lessons what one shouldn’t do at a game jam. In this post I’d like to give you some Dos and Don’ts from my point of view. Depending on your goal when participating in a game jam they might or might not apply to you.

Preparing for a jam

There isn’t much to prepare for a game jam as most of the work is done during the jam. You can’t do the game design upfront as you will only get the theme when the jam starts. Plus coming up with the game idea should be a team effort. You can of course think of a interesting game mechanic that you would like to see in your game. But don’t get to fixated on it and stay open for other ideas.

Here are some things you should do before the jam starts:

After the theme was announced you have to do two things:

Those two go hand in hand: You want a team with a common game idea, at least everybody should be okay with it. So if you haven’t got a team yet talk to some people which direction they want to go (genre, engine, 2D/3D,…) and try to find devs that have the same agenda for the jam.

If you have found a team (or participated with a previously formed one) you should take the next hours to brainstorm and form the basic idea for the game. This means having a rough idea about:

Only after you came to an agreement about those things, everybody in the team can start working. The artists can start to create the first assets, the programmers can setup the structure of the game and the game designers (everybody currently not programming, drawing or doing sounds) can think about the game mechanics in detail.

First half: Building the foundation

It is really important to concentrate on the core game first and get it working before creating nice-to-have features. After the brainstorming you will probably have a lot of ideas that would make the game more fun. Probably more than you could even get into the game if you had double the time.

Setting priorities is the most important thing to do to have a successful game jam. This applies to all your team members: The artists should create the main parts first (and only as much variations for e.g. items that are required to make the game work). The programmers should get the core game running, than adding the assets for it and only if there is still time left going to add some additional stuff (I’m pretty sure there won’t be any time left 😉 ).

The game designers should try to get together a version that has the least features and assets possible and afterwards prioritize the additional features.

Second half: Putting it together

In the second half of the jam your team shouldn’t be busy anymore with adding new features. Instead you should make a clear cut which quite often means that great ideas won’t make it in the game. Even if they look like they will make the game 200% more fun, don’t go that way. Otherwise you will end with a game that has 100% more features that are unfortunately only 50% done. You can imagine that those kind of games aren’t much fun.

For a 48 hours game jam at a weekend this means that you will stop adding features on Saturday evening or at the latest on Sunday morning. At this moment it might seem that there is still enough time left, but it takes time to:

Whatever you do, time will get short. Try to not lose your head and be more careful with changing the game the closer the deadline comes. Especially don’t touch things that are not broken. One of our jams became pretty stressful because one developer decided to clean up the project within the last hours 😉

You should build a first “release” version about 1.5 hours before the deadline, so you will still have time to fix the main issues with your game. As the artists/game designers won’t have a lot to do at this time of the game jam, you can give them the version to test it for major flaws and make a (prioritized) list of things that should be fixed.

Everyone not working on the game anymore should try to get the organizational stuff done, like:

This way the programmers can work to finish the version in the best way possible. And hopefully in a running, funny and good-looking way 🙂

Here are some results of the game jams I participated in:

The last weekend I participated in the InnoGameJam #9 (that’s why this post wasn’t released in time). It was a nice experience again, well-organized and we got together a pretty polished game called LemurGod™ 😉

We were just 3 people (plus 1 for the sound), but everybody knew what to do and we didn’t try to develop a too complex game. So a big thank you to my team members for the great weekend:

And without further ado, here are the links to play the game on your Windows, Mac and Android device!

A game jam is fun! But as with every game project it is also hard work at some points of the development. The short time frame and fixed deadline requires a bit of experience and planning and it’s better to overestimate than to underestimate the tasks. At least one third of the available time should be used for polishing and bugfixing, so you can deliver a game you are proud of.

Don’t let yourself down though if it doesn’t work out the first times. You will learn a lot about your workflow, working in teams and under tough constraints anyway. So keep on jamming!