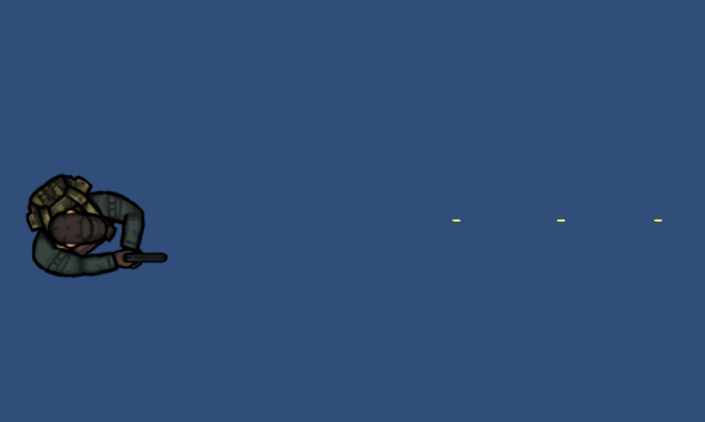 In my last post I started a little sample project to show you how our component-based entity framework is used in practice. The game is a little top-down shooter, but so far only movement is possible, so it’s more of a top-down walker. Time to add some shooting!

Starting with the interfaces

One easy way to get started with a new feature is to think about the actions and events you want to implement with it. Our new feature would be to add weapons to the game, so we call it the “Weapon” feature. The new actions our player (and of course also all other entities in the game) would have, would be to fire a weapon and to reload it:

On the output side of the WeaponSystem which would take care about the logic of the new feature, there would be two events:

Next we can go and implement the fire action in detail.

Weapons have some data which is stored in its own component, the WeaponComponent:

Let’s continue to approach the feature from the action flow. After the Fire action was send to the game, it is catched by the WeaponSystem. The system needs to know which entity fired, so its Id is passed with the event.

We have to check then if the entity has a weapon anyway to determine, e.g. which projectiles are fired and if any bullets are left. Those information are gathered by getting the WeaponComponent of the entity and checking its attributes.

Now we can be sure that the entity has the ability to fire a weapon. Shooting it just means to create a bullet, so let’s do it.

Creating and initializing a bullet

The initial values of the bullet are dependent of the position of the entity which fired it and the speed with which the weapon fires its bullets. All other information are included in the blueprint of the projectile itself.

After creating the projectile our system just decreases the bullet count and queues an event, that a weapon was fired and adds the projectile entity id as the event data:

To make sure our player is able to fire his weapon on a button or key press, our input system has to be adjusted. We add a new InputAction.Fire event and just forward it to the weapon feature:

On the Unity side we have to adjust the Update method of our InputBehaviour to map a button to the input action:

Now each time the user presses the button/key which is mapped to the command “Fire”, the WeaponSystem will get notified about the desired action.

Giving the player entity a weapon

Nothing happens right now as we haven’t given our character a weapon yet. We can do so by giving the player entity a WeaponComponent and defining the kind of projectiles which are fired.

To define the blueprint of the projectiles that are fired, we just have to add a blueprint with a unique id to the BlueprintManager where we define the components the entities of this blueprint will have:

Now we can adjust the player character we create in our LevelSystem by giving him a WeaponComponent, 10 initial bullets and defining which projectiles are fired:

Note: In a real game you wouldn’t create the blueprints in the code but via a XML configuration file. This would be a topic for a separate blog post, though, so let’s keep it quick and dirty for the moment.

If you try again to fire the weapon now, you should be able to spawn 10 entities which move to the right.

Let there be bullets

First we add a component that holds the path to the prefab which should be used for the visualization:

Now all there is to do is creating prefabs that contains the visualizations of the player character and the projectile and tell the blueprints where to find them:

If you start the game now, the bullets look a lot more like bullets.

As you notice you can only fire 10 bullets right now. Our action for reloading already exists, but is neither handled by the WeaponSystem yet, nor fired on a button/key press.

For now, I leave it as an exercise for you to implement the weapon reloading. If you understood how the events in the framework move, it should be straight forward. In the next blog post you’ll find one possible solution.

You can find the source code of the whole project on Bitbucket.

Hopefully adding weapons to our game let you realize the nice, uncoupled way the features of a component-based game behave. We just had to adjust some existing core features (Input, Visualization) to make the new feature work with them. Other features like the movement wasn’t touched at all, but instead were reused for brand new entities (bullets) that didn’t exist before.

For the bullets we didn’t need a single new component for now, we just had to setup the entities the way we needed them. The more components we get, the more possible combinations we get. And if they are designed in a good way, we can reuse them for a lot of different types of entities.

In the next post I’ll implement some nice additions like the reloading and a UI for the game, before moving on to new features like rotating our player character and really hitting stuff with our bullets.

If you’ve got any feedback or questions, just leave a comment or send me a mail!